I went looking for Derrick but couldn’t find him.  A woman, found out later his wife…

I replied with my name and didn’t make the connection.  I’d forgotten the color of his support team and he got my name wrong so that made us even.

He caught up ten miles later, by then chasing the fast chicks.  I called out as they zoomed past, wished them well.  This is how it works.  Alliances change according to the conditions and needs from one moment to the next.

A lone rider stopped at the edge of downtown — Rick from Dewitt, Arkansas.  He was ready for takeoff.

“You headed out, how bout we team up?”  I asked matter-of-factly.  The deal was struck and then there were two.

Eventually, maybe twenty miles later, we picked up Jeremy, which made three.  It worked pretty well.  Not much small talk, but lots of operational chatter.  You’d thought we were out on military maneuvers.

There were specializations.  For example, Jeremy was the scout.  His bike had fat tires and so he’d bomb the downhills, call back to us what he saw, letting us know of the dangers.  Rick did most of the navigating.  I kept watch on time, distance and set the pace.

By this time we were all suffering and made brief stops every ten miles or so.  We’d agreed that it was OK, had plenty of time, and weren’t worried.

Caught up with Derrick six miles from home.  Apparently he couldn’t keep up with the fast chicks either, but gave it the college try, and we had a merry reunion.

We rolled over the finish line somewhat past 2:00 am. 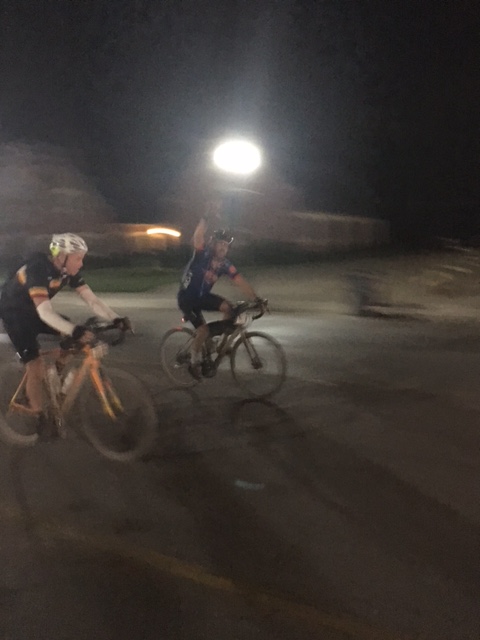 Rick and I crossing the FL

And the unofficial one:

My support team was there along with a smattering of hearty locals to cheer us and offer congratulations.

Jeremy, Rick and I had a brief moment where we congratulated each other before LeLan handed over our Breakfast Club finishers patches and I overheard Rick in his southern drawl…

“I don’t care if it does say breakfast club on there.”

Next were the hugs and pictures with my pit crew and I was nearly overcome with emotion.  Felt pretty good about the finish and I don’t care if it says breakfast club on there either.

In addition to my pit crew…

My wife Cindy deserves most of the credit.  She bought the bike four years ago that got me all fired up again about cycling.  Lots of times when I’m out there riding I should be home working.  Throughout this she continues to support without complaint.  Thanks baby, you’re the best, I love you.

Next, are the guys at the bike shop — Arkansas Cycle and Fitness, my support team back home in Little Rock.  They tolerate abysmal mechanical abilities, patiently listen to requirements, and teach when need be (often).  Time and again the necessary adjustments were made to correct the issues I was having with the bike.  They’ve encouraged and cheered, offered suggestions on routes, tactics, training, nutrition, hydration and everything else related to the sport of endurance cycling.

Finally, my cycling buddies — the Crackheads.  Truth be known they’re probably more trail runners than cyclists, but they’re incredible athletes, from whom I’ve learned much about training for these types of endurance events.  In the summertime, when the skeeters and chiggers get too bad for Arkansas trail running, they come out and ride which makes me happy.