Read Part I – The Signup

I did not feel well and had eaten very little since Checkpoint One.  I was getting dehydrated, had an intermittent cramp in the left quadricep and had just Hit The Wall.

By now Gregg and I were (mostly) riding within eyesight of one another.  He would catch me on the downhill sections and I would pull away on the climbs or when facing the wind.

2nd leg was the toughest…

Gregg didn’t have to tell me that he was hurting and every time he asked how I was doing would always be the same reply.  Talking (or even thinking) about it made it worse.  Once he shared a partial bottle of water.  It wasn’t enough, but the gesture was.

I would have been much better with some fresh water.  The EFS mixture was holding out in my frame bag but I had to force myself to drink from it and it didn’t quench my thirst.  My mind thought I was dying – of thirst.  My body was struggling too with fatigue, GI and heat distress.

At midday the sun was brutal and riders began clustering around what shade there was alongside the roads (not much).  I knew stopping now would be a mistake so kept crawling along.

It was also during this section I got off my bike and walked a few hills.  I did not count, but guess three or four.  Some riders dismounted on every hill and pushed their bikes over.  Many were limping.

Sometimes I would issue a lament, intended in jest, to break tension during the climbs.

I thought Kansas was supposed to be flaaat.

And the miles slooowly ticked away.  I forced myself not to look at speed and distance and focus instead on controllable things like heart rate, respiration and conservation of the remaining matches.

I recall walking up one particularly (especially) steep hill and noticing the heart rate was still hovering around 147.

Are you kidding me?  If I have to work this hard I might as well be pedaling and vowed not to walk up another, and didn’t.

The cramping was kept under control.  Occasionally the left quad would squawk and I would ease off.

I was still having fun.  The hills were technical and required unwavering concentration and skill to navigate.  Let your mind drift at the wrong moment and things go from bad to worse in an instant.  These are the moments I live for.

It was around mile 97 that my thirst became unbearable.  It was still 6 or 7 miles from Checkpoint Two.  Normally not very far but under these circumstances perhaps too far.

I still had a little EFS left in the tank but again it wasn’t easing my thirst.  I began to consider the damage being done to my body and calculated if it was worthwhile to continue.

Suddenly two jeeps appeared in the distance, kicking up dust, and sped my way.  After rapidly closing distance, they pulled alongside the road and several passengers immediately burst into view waving bottles of water in the air.

It was a sight of indescribable beauty.  I pulled over, held out a hand and a bottle magically appeared in its palm.  I poured it down in about three seconds and put out my other hand in hopes of another.  That one straight to the jersey pocket.  Held it out again, poured over my head1.   Ahhhh!  Held it out again, also downed in a few seconds.

In a few moments everything changed.  I went from the brink of collapse to a new resolve.  Was I considering a DNF?  Not only no but HELL NO!!!

And I’d unlocked the Roadrunner’s cryptic message, before things got so damn crazy.  He told me to use them jeeps.  Ostensibly because they have fresh water. 🙂

Gregg caught up and we rode the last few miles into town together, lightheartedly bantering with the locals, smiling and exchanging high fives with the children, basking in the glory of the moment.

Didn’t realize it at the time but things were starting to go our way.

Our support team was now +1.  Kelly, who’d stepped off the course at Checkpoint One (more on that later) was now working in our pit full time.  This added a pair of hands for the bikes, to load bottles, and another brain to help troubleshoot problems.

Our support team knew we were both in trouble.  Gregg was sitting in a semi catatonic state and I refused to eat.  They poured water on Gregg and began putting things in my face to eat.  I would wave them off.

No sandwich, no payday, no rice cakes.  Pickle? I think I’ll try a bite of that.  Yuck .  Water melon?  OK let me try that (not too bad).  Jerky no.  Gu no, chips, cookies, oranges, no. You have a homemade barcake thingie made just for us and this race?  Normally I’d be all over it but right now… NO.

What’s that a cracker with a little tuna on it.  Let me try that.  Well that isn’t horrible, ok, I’ll try another, and another…

Here I am at Checkpoint Two, Eureka KS

Kelly is a marathon runner and he’s dealt with his share of cases of exhaustion.  He pointed out that my voice had that raspy sound runners get just before quitting.

What me quit?  HELL NO!!  It was here that I formulated a battle cry that would be carried over the next 100 miles.

We managed to get in and out of the Checkpoint Two in about 20 minutes which was a bit better than the first checkpoint.  But time was not on our side. 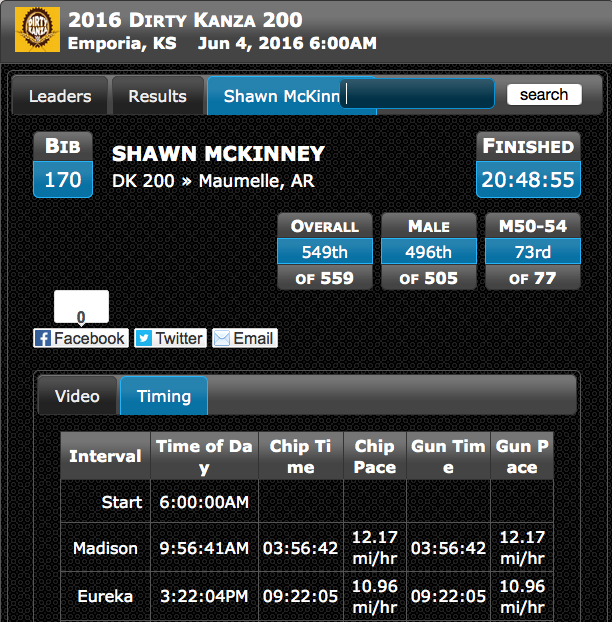 Leaving town somewhere before 4pm meant there’s a hell of lot of real estate left to cover and we still haven’t turned north yet, back into the wind.

My hope was with the sun dropping, so too would the temps and the winds.  The weather patterns seemed to support that hypothesis.

1. (Should be obvious)
The merit of pouring a bottle of water on top of oneself (i.e. to cool off) is proportionate to the proximity of fresh water.  If it’s a long way, save it for drinking.