I mentioned earlier that this route was the same as last year’s, and so after finishing then, knew what to expect.  The second leg has about 55 miles and the tallest hills.

From mile 49 to 79 there’s 30 miles of mostly uphill.  Many of these roads cross ranch land and are lightly maintained.  This is the place where fun and pain cross paths.

The winds were tame, the sun hidden behind a thick cloud cover keeping the temps down but it was muggy.

It was this time last year when I hit the Wall.  But adjustments were made and was confident that trouble could be avoided.

As the going slows, the tedium grows, the mind struggles to find something to latch onto, and begins to play tricks.  Seemingly big things are downplayed.  For example, my left leg began cramping at mile 85, but I largely ignored it.  The terrain becomes treacherous, but I was unconcerned — just white noise.

Small things become a big deal.  For example, an airplane buzzing overhead, became obsessed with.  It seems stupid now that I pulled out my phone, aimed it up, and snapped pictures while navigating some of the most challenging terrain of the day. 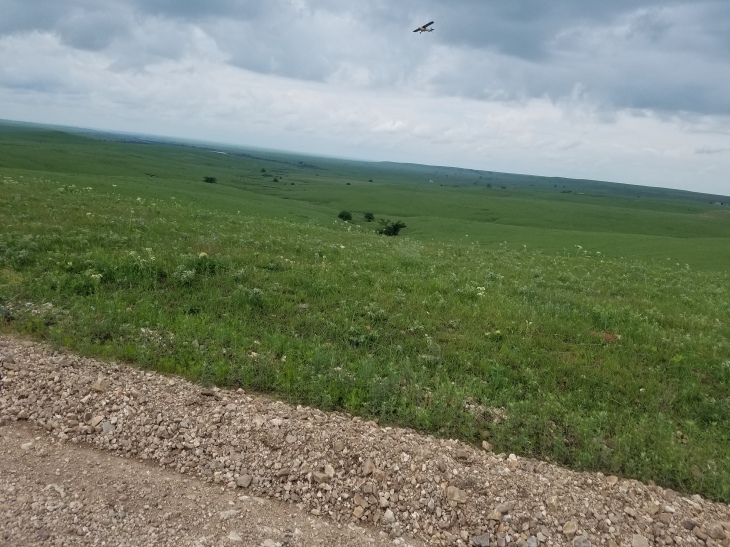 Took this one while riding…. airplane.

Anything to take the mind off the pain.  Don’t look at the odometer or the nameplate.  On its backside was three sad riders, my friends, who couldn’t manage to get it right. I empathized with them.

And that happy rider, who got it right, wanted to rip his face off.  How dare he be happy while we were suffering.  Was he mocking us?  Did I too make a mistake hanging that plate and doomed like the others?

Yeah, I know it doesn’t make any sense.

For the most part, was doing OK, just slowed, by the cramps.  The changes to the rear cassette, and the hill training, performed as expected.  Remained in the saddle on climbs and only walked one hill — the BE-YOTCH.  Could have ridden it, but my cramping left quad begged me not.

I went into detail last year about running out of water during the middle of the second leg.  This year included changes, adding a 2.5L Camelbak to a 1.8L bladder (framebag) and two bottles (cages) — 1.5L.  That’s about 1.5 gallons for those keeping score back home.

In addition to more water I also used (more) electrolytes, although not enough due to the cramping I experienced.  Had some electrolyte pills stashed in a pouch somewhere, but couldn’t find them.  Leaves me wondering if I’d still cramped with those tablets…

Still ran out around mile 95, nine miles from the next checkpoint.  Fortunately a husband and wife duo were parked at the end of their drive, with a pickup load of iced water bottles in its bed.  I stopped and asked if they would be so kind as to share.

“Are you dry?”, the man asked in his Kansas twang, to which I replied that I most certainly was.

I downed a pint as we exchanged pleasantries, grabbed another for the road and just like that I’m good.

I grew up not far from here, so already knew well that good people run plenty in these parts.  But still get inspired by them. One of the reasons I keep coming back is to be with them as they celebrate their Flint Hills, during the late Spring festival known as the Dirty Kanza.

From here on out I have my pit crew to help.  Kelly had just completed the DKlite, and was working his magic down in Eureka keeping the crew operating like a well-oiled machine.  Kyle was in from Seattle and Janice (Mom) from Salina.

That way when I rolled into town, weary from the road…

All I had to do was hand over my bike, eat, hydrate, and relax a bit.  I can’t tell you how much it helped me to have them there.

That time spent in checkpoint two renewed my spirit and provided resolve.

I had a rough go in that second leg (again) but was feeling better than last year.  I could eat and had plenty of gas left to finish.  The muscles in my neck were beginning to ache and I took a few aspirin, changed into dry socks, ate and drank a bit, and hit the road once again.

At 58 miles, the third leg is the longest.  I was feeling fine but storm clouds were brewing and I began to wonder what it would be like to ride through one…